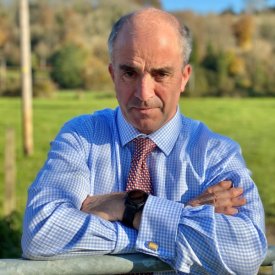 William was born and bred on the family livestock farm at Alvediston, near Shaftesbury on the Wiltshire/Dorset borders in an area that the Grant family have farmed for over three generations. He has lived in the area for nearly 50 years.

William was educated locally in Tisbury & Salisbury. After a 4 year spell working and travelling abroad, he trained at Porlock in Somerset and Moat House in Kent, as a Riding Instructor. He studied farm management at Sparsholt College, Winchester and finished at the Royal Agricultural College, Cirencester where he graduated with a First Class Degree and won the Goldstand Medal as top student in Estate Management out of a class of 120.

Over the next fourteen years William worked for a number of leading agents including Knight Frank, Savills, Bruton Knowles, Pearsons, Clegg Kennedy Drew, Andersons and finally Woolley & Wallis, where he was made an equity partner in 2000. William oversaw a dramatic eight fold growth in sales and turnover and headed up the Farm & Equestrian departments for the firm before leaving to found his own family firm Fox Grant.

William has lived and worked in the countryside all his life. He has been actively involved in the Rural community and property business for well over 25 years and is widely recognised as one of the most experienced Country & Equestrian specialists in the South of England. He is a Chartered Surveyor and Rural Valuer.

William is a passionate equestrian and countryman and has ridden all his life. He still regularly team chases ( Current National Champions ) hunt scurries, inter hunt relays as well as hunting as much as possible with packs across the UK. He is long standing member of the MFH Team Chase Committee and Stewards at the Bath & West and Three Counties shows. Any spare time is spent landscaping his Smallholding, gardening or on family duties.

<< Back to Salisbury Estate Agents branch

A Beautiful Country Home Situated on the Edges of The Quantocks Sold with Successful Tourism Business. Immaculate Four Bedroom Housewith Outbuildings, Glamping Units and Potential To Develop Further. In All...

A truly individual home that is unexpectedly re-available!